Skip to content
Continuing Professional Development > Tools & guidance > What are the changes in the updated OPS? 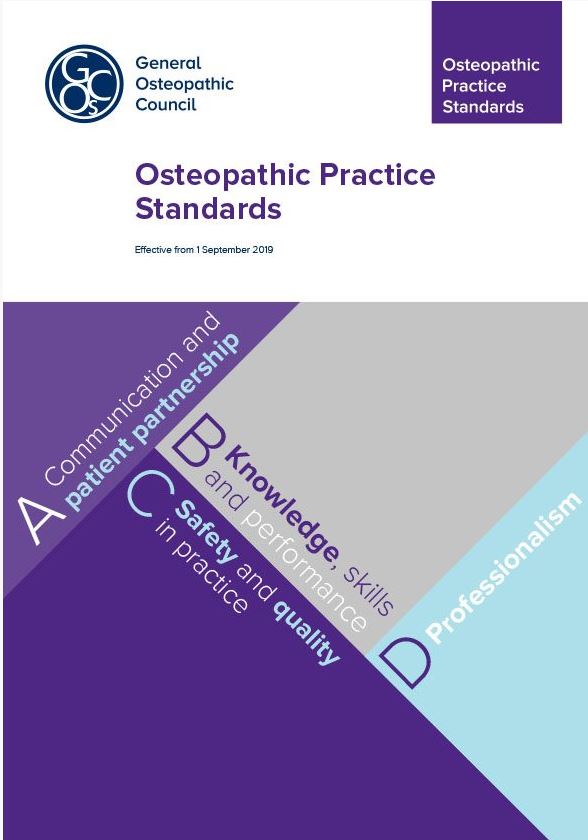 Learn more about the Osteopathic Practice Standards (OPS) 2019 and understand the main changes that have been made from 2012.

The 2019 Osteopathic Practice Standards (OPS) were published on 1 September 2018 and came into effect on 1 September 2019. As part of the new CPD scheme, osteopaths need to ensure that their CPD reflects the full range of their practice. This includes carrying out CPD activities during the three-year cycle which can be linked to the four themes of the OPS. As you begin to record CPD activities under the new scheme, you could start to link these to the updated OPS.

Have the number of standards changed?

What were the main changes?

There is now a specific standard relating to the duty of candour (updated D3) and we have altered the wording of some standards to be more explicit about their meaning.

Creating one set of standards

What were the key issues raised in response to the consultation?

‘Most osteopaths were positive about the changes, and found the updated standards clear and easy to use’

Two of the consultation questions generated significant responses and we discussed these at length with the Stakeholder Reference Group before reaching our final decisions for the updated standards:

Theme B: Knowledge, skills and performance

Standard B1: Philosophy and principles

In the consultation, we outlined three options for addressing osteopathic philosophy and principles within OPS:

Option 1: Inclusion of the osteopathic philosophy and principles in a standard

Option 2: Inclusion of the osteopathic philosophy and principles in guidance (rather than standards)

Option 3: Removal of osteopathic philosophy and principles from standards and guidance

The GOsC suggestion was for option 2, and the updated OPS were drafted on this basis. The Stakeholder Reference Group reached a consensus on this point, which was to accept option 2, with philosophy and principles referenced in the guidance to B1, but to move this reference to B1.1 – making this the first point within the B1 guidance. It was also suggested within the group that B1 should reference ‘being able to apply’, as well as having knowledge and skills, and thus B1 has been amended to:

Theme B: Knowledge, skills and performance

Updated Standard B1: You must have and be able to apply sufficient and appropriate skills to support your work as an osteopath

The consultation version of C6 was the same as the current D11 – ‘Be aware of your role as a healthcare provider to promote public health’. There was considerable concern raised in relation to this standard around the use of the word ‘promote’ in relation to public health. Some worried that this would manifest as a mandatory promotion of government health policies which may be at odds with an osteopathic viewpoint or values.

The Institute of Osteopathy (iO) suggested a modified wording bearing in mind the concerns raised, referring to the role of osteopaths in ‘enhancing health and social wellbeing’. The Stakeholder Reference Group discussed this issue at length, and the group, in general, favoured the iO suggestion but with reference to healthcare ‘professional’ rather than ‘provider’, and referring to the wider context of the osteopath’s role in this respect. The approach reflected in the updated OPS document was to change C6 to:

Updated standard C6: You must be aware of your wider role as a healthcare professional to contribute to enhancing the health and wellbeing of your patients.

The guidance on advertising in D1.2.1 has not changed significantly from the previous OPS, and we did not specifically feature this within the consultation process. Although there were very few comments regarding the advertising requirements set out in D1.2.1 during the consultation, a number came in after the consultation had closed. The issue of advertising and the role of the Advertising Standards Authority (ASA) has been discussed previously in other features in The Osteopath (bit.ly/TheOsteopathFebMarch18), and the reference within the guidance to meeting the requirements of the ASA remains unchanged. The Stakeholder Reference Group members were supportive of the GOsC’s approach on this.

For more detail on the discussions and decisions for reaching the updated standards see p7-9 of the November/December 2018 edition of The Osteopath.

Read the Standards on your phone, tablet or PC at: standards.osteopathy.org.uk